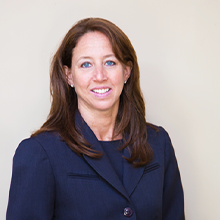 Robin Messinger graduated from the University of Massachusetts at Amherst with a Bachelors of Business Administration with a concentration in General Business and Finance. While earning her undergraduate degree, Robin spent a semester studying International Business in Copenhagen, Denmark.  She earned her law degree from New York Law School in 1995 and was admitted to the New York State and New Jersey Bars in 1995.  During her time at New York Law School, Robin interned for the U.S. Attorney and was involved with the Immigration Law Clinic.  After graduating law school, Robin worked at J.P. Morgan Chase and Brown Brothers Harriman in their Fiduciary Trust departments.

Robin joined the Atlas Law Group in 2007.  She manages the firm’s Estate and Trust Administration Department, assisting our clients with probate proceedings before the Surrogate’s Courts and advising our clients as to their fiduciary responsibilities as Executors and Trustees in settlement of their loved ones’ estate or trust.

Robin also heads our Dispute Resolution Department and effectively negotiates settlements among family members when conflicts arise as to the distribution of assets under a will or trust.  She also negotiates settlements with the county attorneys when the county Medicaid department attempts to institute a claim against a community spouse or a lien against an estate of a Medicaid recipient.

Robin is a member of the Trusts and Estates Section of the New York State Bar Association. In her free time, Robin enjoys spending time with her husband and three children.  She also enjoys playing tennis, bike riding and hiking.